This project is a search for planets around other stars-in particular, in binary star systems.  Binary stars are systems composed of two stars orbiting about each other, much like our Moon orbits the Earth or the Earth orbits the Sun. It turns out that most stars are found in binary stars-the single star like our Sun is the exception rather than the rule. Even a small telescope will split what appears to the unaided eye as a single dot into the component stars. 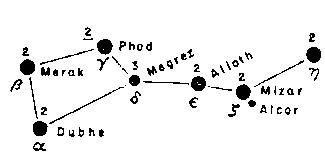 A familiar example is the middle star in the handle of the Big Dipper. If you have good vision you can probably notice that it is a double star, with the brighter one being called Mizar and the fainter Alcor. However, Mizar and Alcor are really just a "visual double"-two stars that are not really at the same distance and do not make up an orbiting pair. But, if you turn a small telescope onto the system, you notice that Mizar itself appears double-it is a true, orbiting "visual binary." This pair is widely separated, and by laws of physics, takes a long time to complete the orbit-perhaps more than 10,000 years.

If you investigate further, using spectroscopic techniques that spread the star's light into a rainbow like spectrum, you find that each component of the Mizar binary is also a binary! Spectral features, dark lines caused by the various chemical elements in the spectra, reveal the duplicity. Thus Mizar itself is actually a quadruple system, composed of two close doubles orbiting about each other. These closer pairs are so close that we cannot split them into individual dots of light. Being so close, the laws of physics means that their orbital periods are much shorter-only days long. 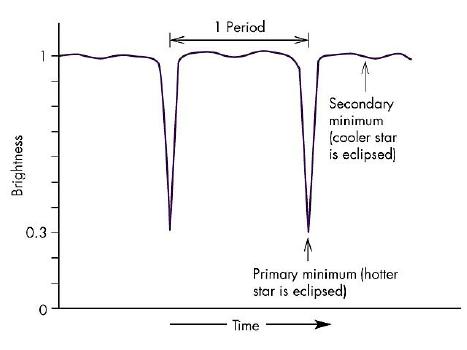 For some binary stars we happen to see their orbit edge-on, so that one star periodically comes between us and the other star. This results in a stellar eclipse-a loss of total light is detected. All known eclipsing binaries are so far away that we cannot split them into two dots with any telescope. We know they are binaries, though, because of the observed, periodic dimming of the light from the single dot that contains the light of both component stars. A plot of the observed brightness versus orbital position is called a light curve, and includes a dip when each star is eclipsed. When the hotter of the two stars is covered up by the cooler, we lose more light-this is the "primary" eclipse, which is deeper. When the cooler star is covered, we lose less light-this is the shallower secondary eclipse.


We learn a great deal by studying the light curves of binaries. The relative widths of the eclipses tell us how large (in diameter) the stars are compared to their separation. Observing the light curves through different colored filters gives different eclipse depths, since the hotter a star is the bluer it is (cool is red-shut off your heated up electric stove and watch the orange-red element grow redder as it cools). Thus, we can determine the temperatures of the stars. If we also know how fast the stars move throughout the orbit we can determine the absolute diameters of the stars and maybe even the masses-how much they weigh.

It turns out that it is possible to have planets in stable orbits within binary star systems. Two general categories of orbits are stable. In one, the planet would orbit close around one of the two stars (close compared to the separation of the two stars). In the other, the planet is in a very large orbit around both of the stars.

However, there are also some other special areas of stability for a small object (like a planet) in the vicinity of two massive objects (like the two stars). These are stable solutions of the so-called "restricted three-body problem," which is composed of two massive objects, one more massive than the other, and a third object of negligible mass. An example of such a stable system exists in our own Solar System: the "Trojan asteroids", small asteroids that are found in Jupiter's orbit, sixty degrees ahead and behind Jupiter, moving lockstep with Jupiter, and forming an isosceles triangle (three equal sides and 60O angles) with Jupiter and the Sun. This is a stable configuration-the Trojan asteroids wander about a bit but, in the long run, stay near these stable points, called the L4 and L5 Lagrange points, for the mathematician who first conceived this possibility.

If we now imagine replacing the Sun and Jupiter with a massive star and a less-massive star, members of a binary system, then we could imagine the possibility of a planet orbiting at the L4 and L5 points. We have coined the phrase "Trojan planets" for these objects.


Furthermore, if it is an eclipsing binary, then there should be a dimming of the light each orbit when the planet blocks some of one of the stars' light. This dimming will be small for even the largest planet-perhaps a 1% drop or less. This kind of change in brightness can be measured, though, so in principle we should be able to see an eclipse due to a Trojan planet.


There are two possible places for the planet-the L4 and L5 points, and two possible stars for the planet to eclipse, giving four possible events. However, in order to maximize the depth of the event, we may want to choose systems with one star greatly brighter than the other. The fact that it is an eclipsing binary assures us of being in the plane so we can get eclipses at all. Choosing a system of greatly different brightnesses makes the eclipse of the hotter star remove the most system light possible, since the light of the other is unimportant. We thus chose systems with known deep primary eclipses, mostly more than three magnitudes.


The condition for the L4 and L5 points to be very stable, not letting the third body wander too far, requires that the more massive of the two stars be more than twenty times the mass of the less massive star. While individual stars are found in a range in mass this great, no known binary systems contain such a pair. However, the system is still stable if it does not meet this criterion, as long as there are no additional massive objects to perturb the planet.


The target systems were thus selected by scanning the Finding List for Observers of Interacting Binary Stars for systems with deep primary eclipses. The resulting target list is below. It also contains a few systems that have solar type stars. These are smaller in diameter and the planet would thus eclipse more of the light, but there are not many such systems known that are free of other problems, like starspots or mass-exchange.


The Trojan eclipses are expected to occur about 60 degrees before and after the primary eclipse, or, in phase units 1/6 = 0.167 before and after phase 0. Thus, the nominal points are phase 0.833 and 0.167. These are further adjusted for the individual geometry of the stars, to compute the phase of a small body first intercepting the starlight ("ingress"), and last uncovering the star ("egress"). Actual, observed (stellar) eclipses are used to determine this for each individual system. 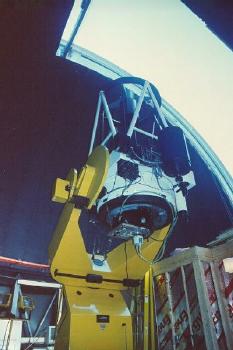 We have been observing theses systems across their predicted Trojan phases and looking for the subtle dimming due to a planetary eclipse.  We are using the 32-inch and 18-inch telescopes at Appalachian State University's Dark Sky Observatory.  The detectors are 1024^2 25-micron CCD cameras made by Photometrics/Roper, and are thermoelectrically cooled to reduce background noise.  Observations are made through blue and green ("visual") filters so we can discriminate between planets (which would cause an equal dimming in all colors) and star spots or other themal phenomena (which would give different eclipse depths in different colors). 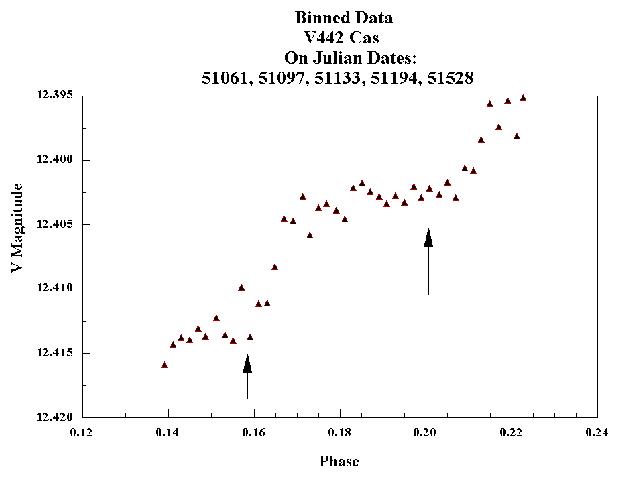 The first promising results appeared in the system V442 Cassiopeia, which has a deep (3.5 magnitude) primary. Several individual nights' data show a dip near phase 0.20, of about 0.005 magnitudes, or ½ percent. When these data are combined together to reduce the observational scatter, the potential event, shown below, becomes more convincing.

Another target that has shown some anomalies in the light curve is YZ Aqulae. Recent results across phase 0.78-0.80 show some interesting dips. We are continuing to observe this phase range, although it is getting lower in the west now and will be gone for a few months, lost to daylight, soon. 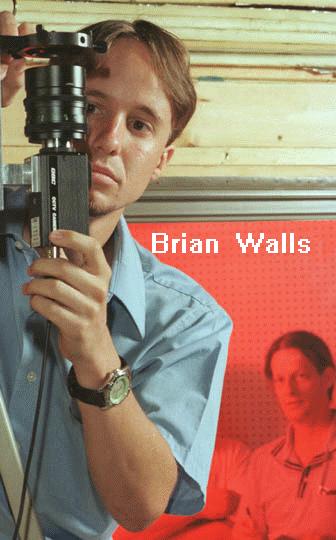 Several students have been or are currently observers in this project.  Brian Walls was the first to help and has since graduated and gone on to work as a Science Systems Associate at the 8-meter Gemini North telescope in Hawaii.  Mike McFadden is now working on the N-Stars project here at Appalachian, as an observer, data reducer and programmer.  Stephen Davis is now a graduate student here working as a research assistant with NSF support.  Kelly Klutzz is supported on the grant as well, as a senior undergraduate research assistant.  Also, Kayce Wohlman and Rebecca Stamilio have recently joined the project as undergraduate research assistants, with some support from the grant.  All will be travelling to the January 2001 San Diego meeting of the American Astronomical Society, to present the status of the project. 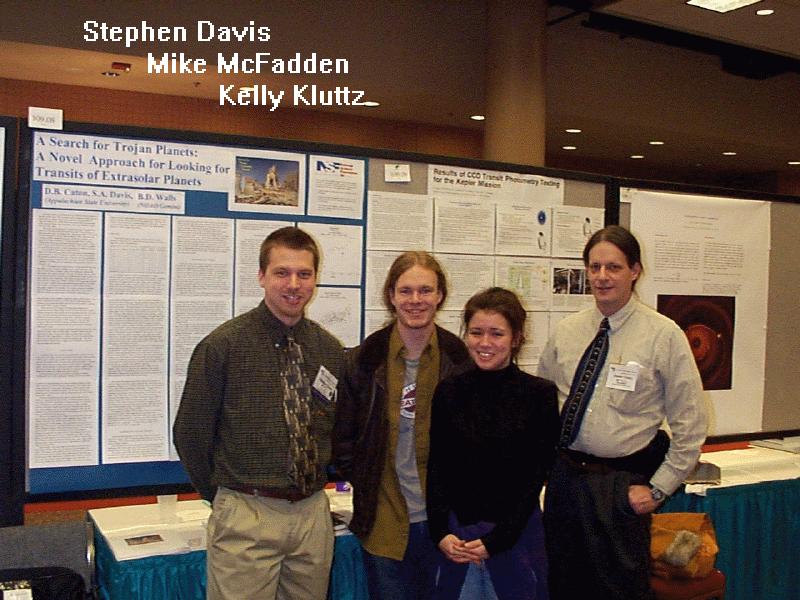 DSO observatory engineer Lee Hawkins has provided a great deal of technical support.  Joe Pollock provided macro programming for data acquisition.  We gratefully acknowledge the support of the National Science Foundation, through grants  AST-9731062 and AST-0089248.  We also appreciate the support of the Fund for Astrophysical Research.  Gregory Shelton and Brenda Corbin, at the U.S. naval Observatory Library, have been indispensable in providing references for these binary systems.  This research has made use of the Simbad database, operated at CDS, Strasbourg, France